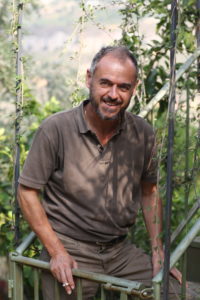 Charles Nassar is a Lebanese artist born in 1965 in Remhala, Aley.
He pursued art studies and received a diploma in drawing.
He started creating art from metals since an early age, while being around his father’s atelier.

During the past few years, Charles created rare and special statues from war remains. They are composed of random pieces of missile fragments welded together, and their sizes range from small to very large.
This hobby took place in parallel with his company’s work (Shazaya S.A.R.L.) which is specialized in metal production, furniture and event decoration.

He participated in many local and international exhibitions and received certificates of appreciation.
His work was also featured on all major TV channels and printed/online publications in Lebanon and the Middle East. Take a look.